I climbed a mountain one day and lay down on its peak, happy to rest after an arduous two-hour ascent. I watched kites soar above, large and sleek in easy flight, ruling the skies like a complacent oligarchy, until something different cut across their flight path, and dwarfed them. I didn’t know the distinctive under-view of a white-bellied sea eagle at that time, but a small amount of research told me that’s what it was. I went by size then to identify one of the region’s biggest birds of prey, with a wingspan that can reach 2.2 metres. I was awestruck, the massive bird crossing the path of lesser kites in a cloudless blue sky was an unforgettable sight.
Many years later I was amazed by the species again, though this time I had unimagined access to one in a completely unexpected place.
I was walking to work on the Wanchai harbour front, which may sound nice if you don’t know Hong Kong, but in the years before the new government development it was a soulless jumble of badly planned ugly constructions of unrelated usage, spaced-out in lonely blocks, connected by tarmac, hideous iron fences and concrete. On the surface it has the biodiversity of a multi-storey car park in Abu-Dhabi, and the environmental charm of a caged golf driving range in suburban Tokyo. The white-bellied sea eagle was perched mysterious and god-like, on bamboo scaffolding that encapsulated the air vent of the Mass Transit Railway’s under-sea line to Kowloon. 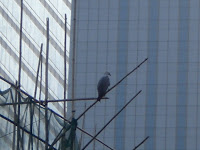 It wasn’t a sight I expected in Wanchai, in the shadow of the glass-walled Harbour View hotel, and a couple of blocks north of the city’s notorious girlie bars. But over the following six months I saw that bird two to three mornings a week, always perched on scaffolding, never in flight, never doing anything in particular, just sitting and shifting a bit from one piece of bamboo to another. I often wished it would open up its wings and give a display of eagle action, but I never had time to watch it for more than 5 minutes. I was always shuffling obediently to work.
The white bellied sea eagle must be one of the most beautiful raptors in the world. Its grey and white two-tone uniform accents the perfectly honed body-form of a superior bird of prey. A powerful hooked beak juts from primeval eye sockets that direct its gaze forwards. From below, black flight feathers frame the diagnostic cruciform extending from its white breast and belly, wings tipped upward to form a V in flight.
Their hunt has been captured by numerous wildlife cameramen, resulting in a readily available archive of stunning footage. Their death dive and talon grab of sea-surface victim is perfect, almost. Perfect except for the half-held venomous sea snake that almost bit back as it thrashed mid air, until the climbing raptor managed to clamp its foot around the snake’s head.
An estimated global population of 10,000 individuals is thinly spread along a vast archipelago of coastlines that stretch from India and Bangladesh, South China and the whole of southeast Asia, to Papua and the huge outline of Australia, including Tasmania. They form mostly monogamous partnerships, and stay put in territory they fiercely defend, often nesting for years in the same massive, but well hidden, eyrie that grows with each breeding season.
Occasionally a rogue itinerant may try to break up a pair of lovers. And before you get sentimental about raptor monogamy, you should be aware that, just like with humans, adultery is not unknown.
An intrusion may lead to goose-like honking and physical confrontation. The battle begins high in the sky where challengers lock talons and hurl themselves into a spinning dive, forming a wheel that strains with accelerating centrifugal force, as it dangerously spirals towards ground. It appears that the first to let go is the looser, for being faint-hearted. I always assumed that recklessness was a uniquely human virtue, but it seems the sea eagles rate it too.
The species is classed of least concern by the IUCN, but there are local populations throughout its range that are floundering under pressure from human encroachment. In recent years reports of shootings in the Philippines and Australia have highlighted the vulnerability of the species.
In Hong Kong the population has held steady in recent  years at around 15 breeding paris, with  AFCD research suggesting an overall upward trend in the past decade. Nests are spread quite evenly in isolated corners of the territory, each pair giving the others a respectful distance. But there is a noticeable gap in the northwest, where a hundred thousand migratory birds flock each winter at the Maipo bird sanctuary, bringing with them a trail of foreign raptors. A disproportionate number of 17 identified nests in the last decade have been on small uninhabited islands, showing a clear liking for being nowhere near us. 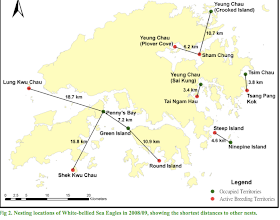 But the full story is a little more complicated because they are attracted by some aspects of the built environment. The Wanchai eagle perched on its bamboo tree was one example, but there have also been reports of nests in man-made typhoon shelters and near piers amongst the throng of sea traffic. One pair nested on a pylon for high-voltage power lines, near a densely packed housing estate on the south side of Hong Kong island. The Hong Kong electric company erected netting around danger points to protect the birds, and even built an artificial nest at a nearby alternative location. It’s not clear what happened to the birds a year later, other than the fact that they stopped being spotted in the area. Let’s hope they found better homes before they were zapped.
A similar situation in Queensland Australia a few years earlier led to the deployment of a crane to lift a 300 kg nest off a pylon and onto a purpose built nesting pole.
While nests near human habitats are not unknown, breeding studies indicate that they’re less likely to successfully reproduce in unfavourable locations. Not only that but in the past Hong Kong’s white-bellied sea eagles have been endangered by two-legged kleptoparasites, human egg collectors. One specialist told me that he thinks the collective memory of egg pinching in bygone years has influenced the species into hiding their nests in the remotest locations.
While there are reasons to be cautiously optimistic about the white-bellied sea eagle’s outlook in Hong Kong, nothing can be taken for granted. Wildlife needs both habitat and food, and there are pressures on both fronts. Fish stocks in Hong Kong waters are notoriously depleted, with local fishermen having to cast their nets further away each year. Most of the fish swimming in tanks at sea food restaurants come from the Philippines and Indonesia. Closer to home eagle watchers have noted diminishing catches by the fishing raptors.
And remote nesting sites don’t stay remote forever. It is an indisputable fact that development is encroaching on further corners of the territory. How much this will affect eagle country depends on how the situation is managed. There is good evidence that eagles have already given way to new business ventures.  Not just those deemed a social necessity, such as the construction of new towns for a bulging population, but for leisure and entertainment, in the case of Disneyland.
When the American leisure park franchise came to Hong Kong an environmental assessment inconveniently discovered the only white-belly nesting site of Lantau island just a few hundred metres from the 1.8 billion dollar amusement park. The main issue for conservationists was not so much the presence of the park, but more the effect of the planned nightly fireworks and laser display. They warned that the disturbance could induce the birds to abandon the nest, eggs, fledglings and all.
But Disney with its 316 million dollar stake, backed by the Hong Kong government with its 419 million dollar share, was very keen for the fireworks to go ahead. Lucky for the partners, relevant government department spokespeople only saw a “minor impact” to the birds.
The opening went ahead to great fanfare in 2005, and coincidentally the nesting birds failed to successfully breed in that location again.
Disney’s apparent lack of interest in the fate of wild birds contrasted with their efforts to get the feng shui right. There is a lot of confusion about feng shui around the world. It literally means wind and water. Some people think it’s about luck and getting cash, others think it’s about a harmonious relationship with the environment. Either way Disney consulted some feng shui masters who told them to change the angle of an entrance gate, put bends on pathways to stop good luck slipping into the China Sea, and placed cash registers near corners where more wealth is likely to pour in. The Feng shui experts contracted by the park apparently saw no problem with nightly fireworks and laser shows that could disrupt the lives of a pair of rare and beautiful raptors.
It took 7 years since opening for Disney investors to start feeling the effect of the feng shui when the park finally posted an annual profit in 2012, while the “minor impact” on the birds left an empty nest, a white-belly free Lantau, and scant information on where the eagles landed.
One expert I spoke to was reluctant to make a causal link between the events. But it is hard to ignore the fact that before Disney’s daily pyrotechnics rare eagles bred in the vicinity. Conservationists warned of the consequences, and Disney, backed by the Hong Kong government, ignored the warnings, and the birds moved away. So draw your own conclusions from that.

Meanwhile in the months when the Wanchai eagle visited the MTR vent I craned my neck every morning to spot the bird as soon as the bamboo perch came into sight. Seeing or not seeing it could have a huge effect on my day. I was so resigned to the inevitability that such an anomaly couldn’t possibly continue, that every time it reappeared, it was like another fresh miracle, elation ensued. Should I be forced to explain what was the miracle, I’d be hard-put to say. I suppose it is something to do with witnessing the extraordinary against all the odds, in a built environment so detached from nature. But if the bird’s nonchalant body language meant anything, it seemed to be saying, “So what?”

Eventually the MTR corporation finished repainting the vent, and the bamboo scaffolding came down. The eagle never landed in that spot again. But since then it has reappeared in the neighbourhood intermittently, normally in the winter months, sometimes perched at the top of the nearby Hong Kong academy of performing arts. It could have been the same one I saw a mile or so along the harbour soaring over Green Island with its wings angled into a shallow V, perhaps eyeing egret chicks on the busy hatchery below. When its darkened silhouetted body tilted on a wide arc the sunlight caught its chest feathers, and lit them up into a flash of white, the unmistakable cruciform framed by black flight feathers.